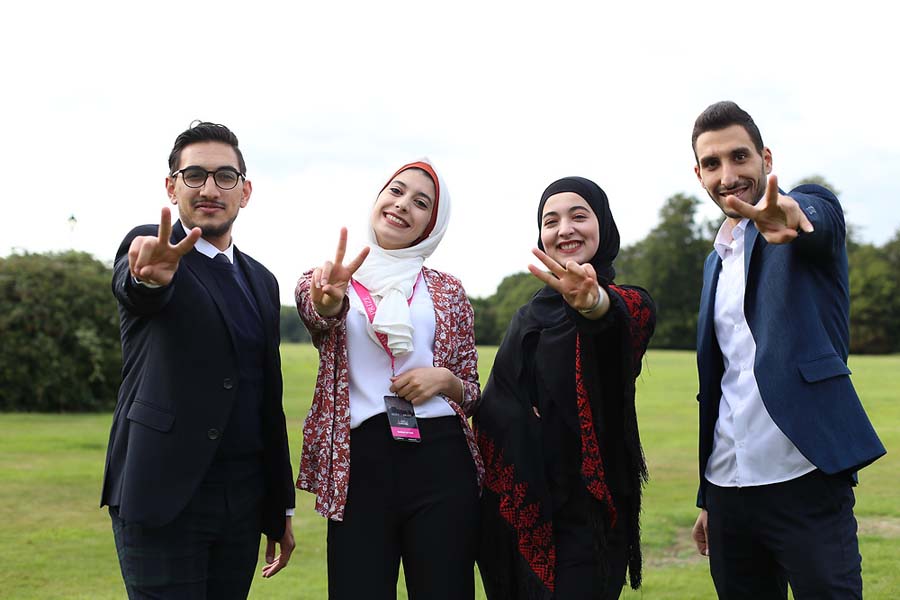 LONDON | Al-Quds University’s undergraduate team, known as CleanEcare, reached the semi-finals at the Hult Prize International Competition for their entrepreneurial project of designing a medicated fabric that sterilizes itself using electricity.

Based on a study conducted by CleanEcare, the innovative fabric design will be used into making lab coats, scrubs, physician attire, pillows, and bed sheets, which have the ability of decreasing hospital acquired bacterial infection.

In the on-campus contests, CleanEcare was among 86 teams from Al-Quds University that took the lead to create entrepreneurial ideas, all of which carried forward pioneering projects that the university will embrace and develop. The team then competed with teams from other Palestinian universities, and they won first place.

CleanEcare traveled to London to participate in the semi-finals at the Ashridge Centre for Business and Sustainability, known as “Accelerator”, where each team was required to present an innovative business project with the potential of employing a total of 10 million individuals around the globe before continuing to the Global Finals in New York City.

Lutfi Al-Atrash, in charge of the production of the new material, said that the idea was an outcome of deep thinking about tackling a big challenge of the time.

Samah Ayyad described the event as “a new experience which made me feel more self-confident, and activated an unprecedented spirit for competition and success”. She noted that a manufacturer for making the prototype will have the capacity to accommodate some 200 employees, which in turn helps fight unemployment and promote local economies.

In charge for the testing and researching part, Ahmed Toukan pointed out that their project is markedly unique, in that the application of the new fabric will be effective in fighting bacteria at hospitals and health centers, which consequently decreases fatal infections.

Since its inception by Palestinian businessman Ahmed Al-Ashqar in 2009, who was a student at Hult International Business School, USA, the Hult Prize has been a benchmark program for social entrepreneurs. Each year, the Hult Prize team issues a big bold challenge aligned with a large market opportunity, inspiring students, whether in undergraduate or graduate programs, to solve its greatest problem.

Al-Quds University seeks, as part of its pioneering vision, to promote knowledge and intellectual exchanges by providing its students with opportunities to learn about world cultures and expertise. Aiming at contributing to creative initiatives and ambitious activities of global interest, the university continuously encourages its students to participate not only in domestic competitions and championships, but also in international ones.