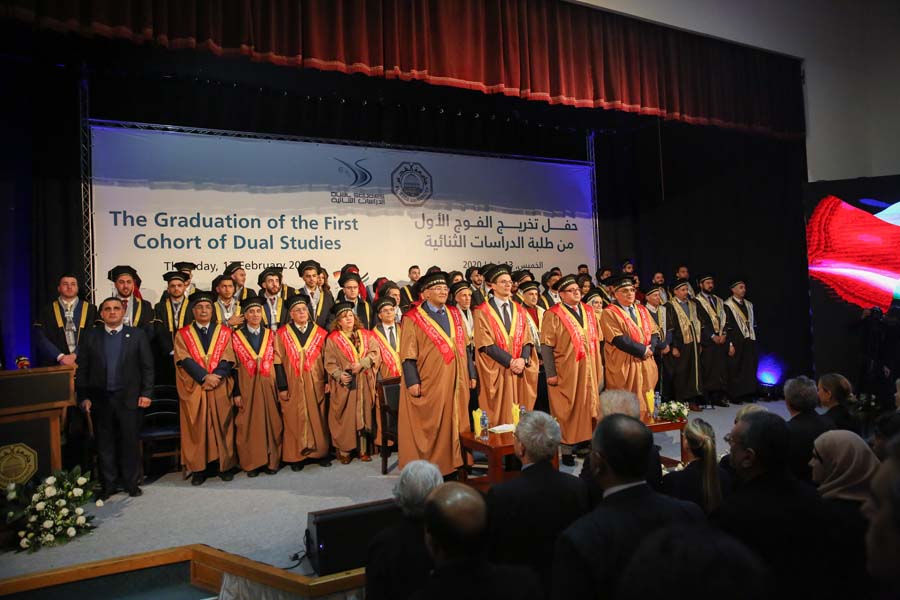 In his speech, Prof. Dr. Imad Abu Kishk congratulated the graduates and their families, saying that the event marks a special day for AQU and Palestine, in which we witness the graduation of the first cohort of Dual Studies students. “It will contribute to bridging the gap between the educational outcomes and the needs of the labor market”. He emphasized that the Palestinian community needs such a model of education to build a generation of professional graduates who are equipped with sound field experiences, side by side with the theoretical knowledge.

“As an institution that has pioneered in introducing modern programs and innovative initiatives tailored to address the needs of the Palestinian society, Al-Quds University foresaw the value that the dual studies model would add to higher education in Palestine, and the role it would play in aligning the outcomes of education with the needs of an already-staggering job market and faltering economy,” added Abu Kishek.

He thanked the German partners for their continued collaboration with AQU in implementing this program, stressing that the success being made is a result of the close collaboration among the partners, including the private sector.

Professor Abu Kishek asserted that AQU’s Dual Studies is one of the most successful and impactful educational programs in Palestine, stated that several universities both in Palestine and the Arab region have reached out to AQU for advice and guidance in building dual studies programs.

In his speech on behalf of the Palestinian Minister of Education and Higher Education, Dr. Ihab Qubbaj said that he is impressed by the success of the Dual Studies program which provides solutions to the challenges facing higher education in Palestine by assisting in bridging the gap between the education outcomes and the needs of society. Noting that the Palestinian community needs such programs of education and training, Dr. Qubbaj urged Palestinian universities to adopt effective models similar to this program.

Mr. Michael Herold praised what has been so far accomplished in the partnership between the German government and Al-Quds University, saying, "Germany is proud for participating in the establishment of this successful program. I belong to a country with a long history in Dual Studies, and I am pleased to see this model gaining momentum around the region”.

Dr. Salah Al-Din cited several of the achievements of the program that have been made since its inception in 2015, indicating that the university’s experience in providing such a model of academic education is unique not only Palestine but also in the whole region. Thanking the German government for supporting this program, he noted that AQU “works relentlessly on promoting dual education, making it an integrative and comprehensive model that is well-known for the close cooperation between the partners, the highly-demanded fields of specialization, the substantive expertise of the faculty, and hardworking students”.

Representing the private sector, the General Manager of the National Aluminum and Profiles Company (NAPCO), Mr. Anan Anabtawi said that AQU’s Dual Studies program is was highly valued by the private sector for its full alignment with the labor market and its substantial contributions to sustainable development in Palestine.

He noted that the partnership between AQU and the private sector in this program began with a small number of students in a couple of programs, “yet the excellence of the students during their training in companies is an indicator of the program’s remarkable success”.

Representing the program’s graduates, Ghazal Salameh, from the Electrical Engineering program, spoke highly of the experience she and her colleagues had gained from this promising program. She explained that it had contributed greatly to building her character, enhancing her self-confidence, as well as offering her more opportunities in the job market.

Offering her gratitude to Al-Quds University, Ghazal said, "I would like to send a message to prospect students who will join the program soon and tell them to approach this experience with hearty zeal, because it will teach you a lot and allow you many opportunities to build your characters".

AQU’s Dual Studies program is based on the German model. It combines on-campus theoretical learning with simultaneous professional training in partner Palestinian companies in the areas of Information Technology, Electrical Engineering, Business Administration, and Industrial Engineering.

Launched in 2015, AQU’s Dual Studies program seeks to engage Palestinian young adults into the labor market at an earlier stage to better equip them with the soft and hard the skills they will need in their future careers, which contributes to the reduction of unemployment rates and enhances sustainable development in Palestine. 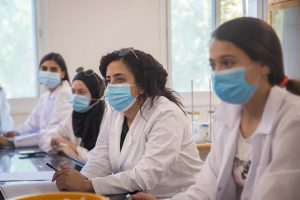 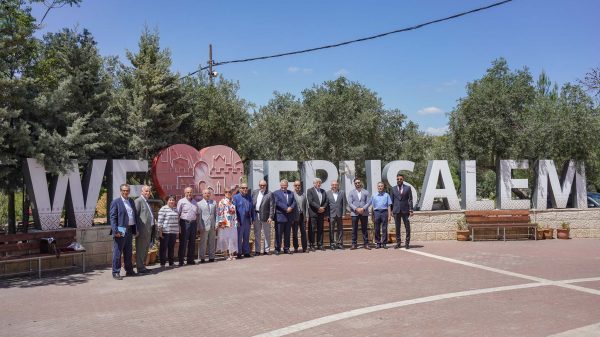 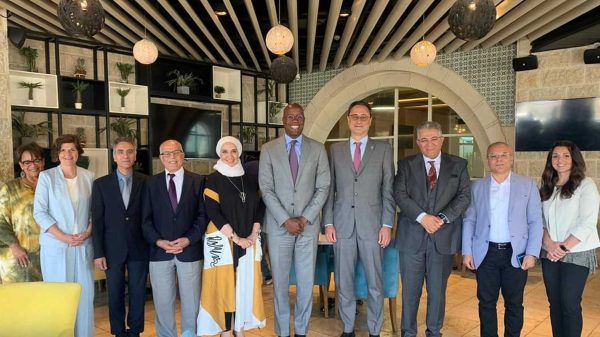