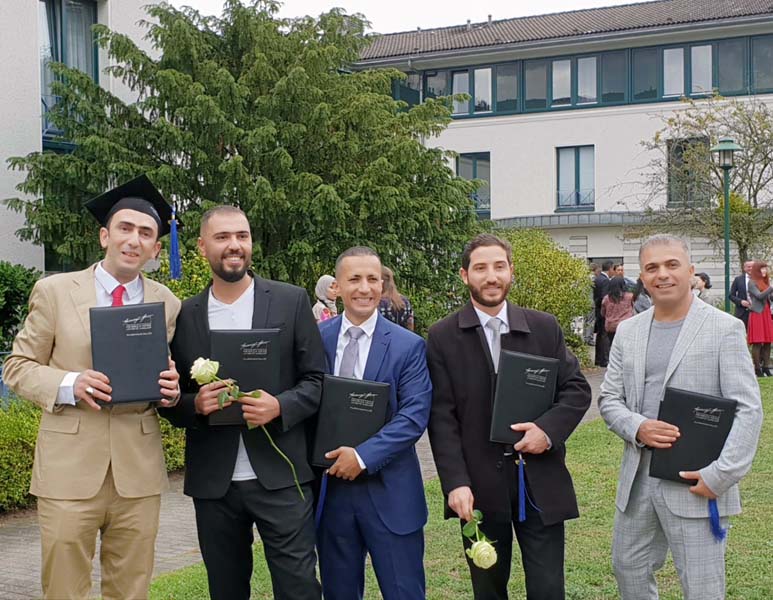 GERMANY | Al-Quds University (AQU) and Heinrich Heine Düsseldorf University (HHUD) celebrated the graduation of the 10th Class of the joint Master’s program of European Studies, which was established in 2009 as part of a bilateral partnership between the two institutions.

The ceremony was held on the campus of Heinrich Heine Düsseldorf University, in North Westphalia, Germany, and was attended by senior officials from both universities.

Executive Vice President Professor Hassan Dweik, who attended the ceremony on behalf of AQU, conveyed the congratulations of AQU’s president and leadership to the European Studies program’s faculty and staff, and also to the graduating cohort. In his commencement address, Prof. Dweik praised the program’s capacity to attract top Palestinian students who come in eager and curious to learn about Europe’s history, policies, culture, economy, and government. They leave as prepared professionals capable of navigating issues that relate to the European Union, and ready to provide nuanced analysis and advice to their future employers and colleagues on matters that pertain to the Old Continent.

The President of Al-Quds University Professor Imad Abu Kishek expressed his deep appreciation for “the strategic relationship” that AQU maintains with higher education institutions in Germany, which contribute significantly to the promotion of education in Palestine, and to the enhancement of the academic and research programs at the university. He added that the MA of European Studies program embodies AQU’s internationalization efforts, which have thus far culminated in several successful academic and research partnerships with universities on all five continents, and from which hundreds of scholars benefit every year.

Students of this jointly implemented graduate program by AQU and HHUD are selected jointly. The program is highly selective, and admitted students receive full scholarships that cover their tuitions and living expenses.

Graduates of previous classes have landed jobs both in the public and private sectors. Several alumni have been recruited by the Ministry of Foreign Affairs as diplomats working within the European desk, while others have been hired by international organizations, NGOs, as well as the private sector.

Students enrolled in this program attend the first half of the two-year program in Palestine, and complete the second year in Düsseldorf, Germany, where they receive both theoretical training and practical study tours of the different institutions of the EU. Taught in English, students are also required to learn another European language such as German or French.

“When Al-Quds University and Heinrich Heine University came together to embark on this educational journey, few believed that it was possible to achieve a partnership between two physically distant and culturally different universities”, added the President Al-Quds University. “It is precisely this diversity that adds unique value to the knowledge, which in the 21st century can no longer be confined to a country or even to a single continent”.

Although special, this joint program is among several international partnerships that Al-Quds University maintains with foreign universities and research institutes. The Al-Quds Bard partnership is another example of such successful partnerships. In 2009, Al-Quds University combined with Bard College in New York to open Al-Quds Bard College — the first liberal arts school in the Middle East. The Dual Studies Program, created in partnership with the German government, is another example. These programs have been achieved as part of AQU’s strategic plan to diversify and further internationalize its programs with an aim at expanding the learning opportunities for its students and researchers.