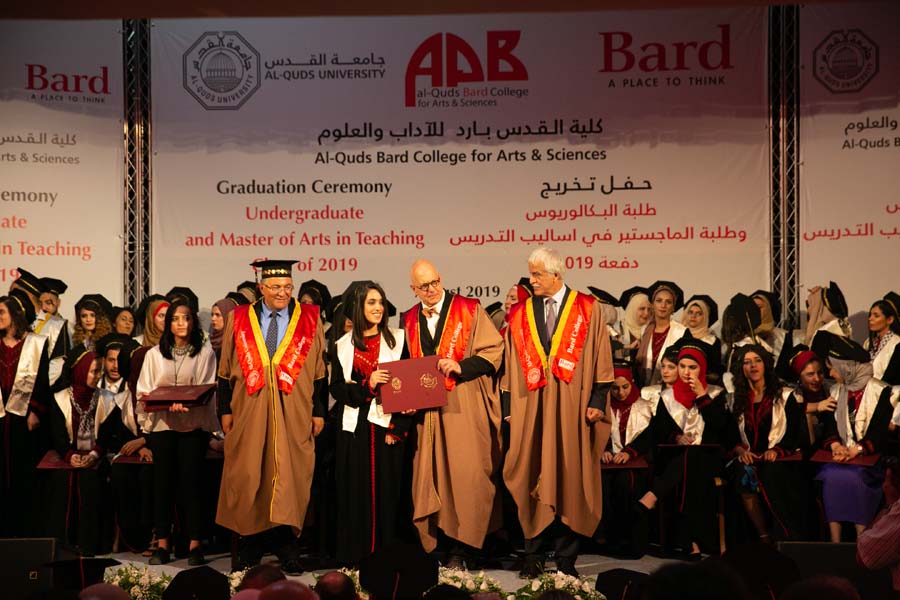 JERUSALEM | Al-Quds Bard College for Arts and sciences celebrated the graduation of the undergraduate and graduate members of the class of 2019.

The tenth commencement ceremony was held with the participation of the President of Al-Quds University, Dean of Al-Quds Bard College, President of Bard College in New York, and Minister of Education and Higher Education, and it was attended by the university’s vice presidents, deans, faculty, staff, and the graduates and their families.

In his speech, HE Palestinian Minister of Education and Higher Education Prof. Marwan Awartani said that he was delighted and honored to join Al-Quds University (AQU) in celebrating the tenth commencement of Al-Quds Bard (AQB). He began by saluting AQU for its vision and courage in taking “innovative initiatives” in the various aspects, citing Al-Quds Bard College (AQB), the Dual Studies program, and the university’s Business Incubator as indicative examples.

Awartani added that the beautiful thing AQU has done, through collaborating with Bard College in New York, is that it “offers opportunities for its graduates to enhance their chances of navigating in a complex academic program, and ultimately make the right decisions, something which liberal education can offer”.

President of Al-Quds University Professor Imad Abu Kishek began his speech by welcoming the attendees and congratulating the graduates and families. He stated that his priorities as a university president are simply to prepare the graduates of AQU to enter the world “ready to succeed in their careers and contribute to prosperity around the globe”.

He pointed out that Al-Quds Bard College, after ten years, has become one of the brightest stars of Al-Quds University. In this context, he said that the graduates of 2019 “will join distinguished company of AQB alumni who are holding excellent jobs in the public and private sectors and pursuing higher studies, who are teaching children in classrooms, and who are working tirelessly for the freedom and dignity of the Palestinians”.

Abu Kishek saluted and thanked Prof. Leon Botstein and his colleagues for their commitment to the ten-year-old partnership between Bard College in New York and Al-Quds University, pledging to do all that in his power to maintain this unique partnership.

Dean of Al-Quds Bard College Dr. Daniel Terris welcomed the university’s leadership and the graduates and their families. He said that Al-Quds University and Bard College had created ten years before an educational institution to combine the best ideas about education from Palestine, from the United States, and from around the world. He emphasized that a university education “should not be simply about building technical skills, but should open the minds of youth and teach them how to think deeply about the problems of their society and those of the entire world”.

He praised the academic and research work of both the undergraduate and graduate students of Al-Quds Bard College, drawing particularly on their excellence in local and international championships by the help of the tools which the college provided them to bring their new ideas to new places.

The president of Bard College in New York Professor Leon Botstein congratulated the members of the class of 2019, hoping that the education they have received here at AQB will have a lasting and positive impact on their professional work and aspirations for the future and on the life of the community they will join in the years ahead. He thanked all faculty and staff who worked hard “day in and day out” to make this program possible.

Dr. Botstein pointed out that despite all skepticism in the early days about the success of the partnership between Al-Quds University and Bard College it sounded as a great idea to collaborate between a Palestinian university and an American liberal arts college, an idea which, he said, laid the groundwork for the creation of a new kind of program and a new kind of opportunity for Palestinian students and teachers. Describing educational institutions as ‘the bedrock’ for democracy, freedom, and dignity, Dr. Botstein called on these institutions to resist all the ups and downs in the society “so that the society will be better off”.

Professor Leon Botstein noted that the liberal arts tradition both institutions represent is designed to promote the link between democracy and education. It is, in his words, an active collaboration and friendship, and a symbol of mutual understanding between the American people and the Palestinian people. He expressed his admiration of the thriving and growing collaboration between AQU and Bard College, pledging that the partners “are in it for the long run”.

Najwa Rishmawi, from the MAT program, expressed her deepest thanks to the professors “who indeed instructed, encouraged, guided, and inspired us to stop being traditional teachers, but to become teachers with broad unleashed horizons.” Reflecting the impressions of AQB’s graduates, she said that Al-Quds Bard has a friendly comfortable environment where the students feel like home and share a great deal of education, support, and collaboration in a perfect milieu.

“When saying Al-Quds University Bard, it’s equivalent to self-actualization, as this magnificent educational edifice has contributed in shaping our current characters and virtues as well as in supporting us to build high self-confidence by which we can share our ideas, speak up our minds, and improve ourselves to the maximum,” added Rishmawi.

Rishmawi concluded by saying that the MAT program offered by Bard College is literally the best due to the various modern teaching styles the professors are adopting and the mutual learning they are promoting.

Another speaker, Huda Abu Daw’ud, said that her experience as a student at Al Quds Bard could be rendered to a metaphor for life itself. According to her, it was a “roller coaster” filled with students and faculty from different parts of Palestine and elsewhere in the world.
She maintained that the students were able to develop a collective stance on issues that mattered to them, “which ended up being not only a learning experience for us as students but for the AQB faculty as well.”

“It is definitely a place where students can push boundaries and redefine certain rights such as freedom of speech. If there is anything I am going to take away from AQB, it will be that education is resistance to tyranny and injustice,” added Abu Daw’ud, the undergraduate class valedictorian of Al-Quds Bard.

Al-Quds Bard College for Arts and Sciences is the first in the region to offer graduates a US and a Palestinian degree, both at the Bachelor's and at the Master's level. The partnership between Al-Quds and Bard College seeks to help realize the two institutions' shared educational goals in ways that are effective and sustainable, and that contribute to systemic improvement of the Palestinian education system. This partnership is a source of invaluable knowledge and experience for the international faculty, students, and institutions involved in the exchanges, as well.