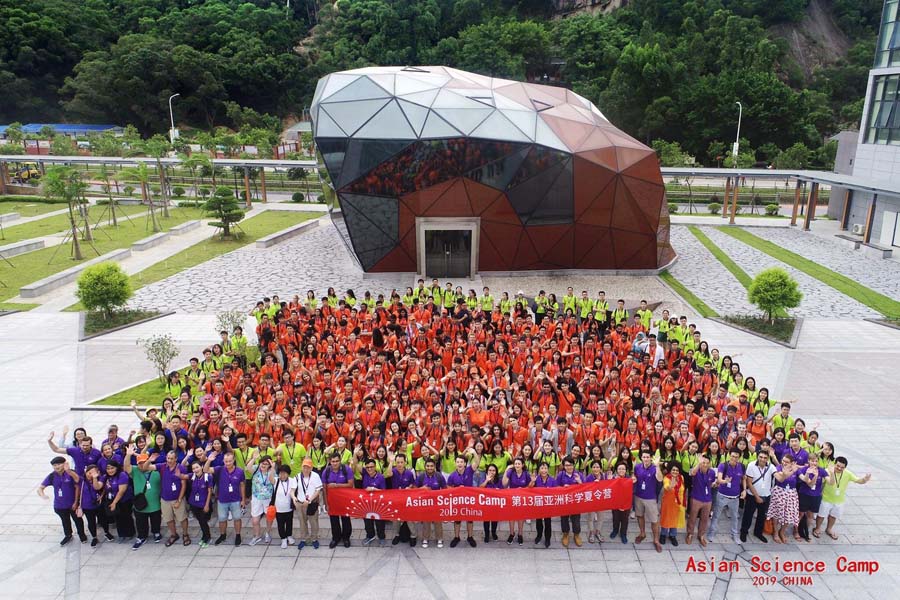 Shantou, China | Al-Quds University harvested second place for the best research project on environment at the Asian Science Camp  (ASC( that was held in Shantou, China, between July 28th and August 3rd, 2019.

Representatives from over 40 countries around the world participated in the camp in Shantou, along with five Nobel laureates in various natural sciences as lecturers at the camp and 10 other distinguished Asian scientists. Some 60 projects with feasible solutions for a range of issues that are deemed real dilemmas in the world, particularly in Asia, were submitted.

AQU Executive Vice-President Dr. Hassan Dweik, who is also member of the International Committee of the ASC, emphasized the importance of the students' participation in bolstering their knowledge on the fundamentals and skills of scientific research, which in turn contributes to global scientific research and promotes education in Palestine. He pointed out that Al-Quds University provided full support for Palestinian high school students to enable them to participate in the largest gathering of Asian students and assist in reshaping the future of education in the region.

Director of the Meet Math Museum at Al-Quds University, Jihad Abu Kbash, who headed the AQU’s delegation, cited that Palestinian Sarah Jaber, shared with Turkish and South Korean students, received a silver prize for her “Filtrago” environmental project which is based on the idea of turning sea water into fresh water. Abu Kbash explained that the machine being designed “converts the energy from sea waves into electrical energy to operate three other components: the first is to remove plastic contaminants from water, the second to purify water from sand and other contaminants, and the third to filter and desalinate water to make it drinkable”.

Last year, Al-Quds University participated in the Asian Science Camp and won first place for a research project on the recycling of glass waste.

As the largest summer camp on science in Asia, ASC is held every year in different countries in Asia and attracts hundreds of international students to exert their strength in physics, chemistry, mathematics, and biology. The aim of the Asian Science Camp is to enlighten science talented youths through discussions and dialogues with Nobel Laureates and other world-distinguished scientists, and provide them with the opportunities to demonstrate their originality and advantage.

It is worth noting that Al-Quds University maintains active collaboration programs and cooperation agreements with several universities and research institutes in China. Perhaps the most noted example of the success of this growing cooperation between Al-Quds University and its Chinese counterparts is the establishment of the Confucius Institute at AQU, which remains the first Chinese language and cultural institute in Palestine. Established in 2015, the Confucius Institute at Al-Quds University serves as a cultural center that offers a range of language and educational programs for Palestinian students, and serves as a cultural bridge between Palestine and China.

Al-Quds University celebrates the graduation of the 38th Class