Al-Quds University celebrates the graduation of the 38th Class 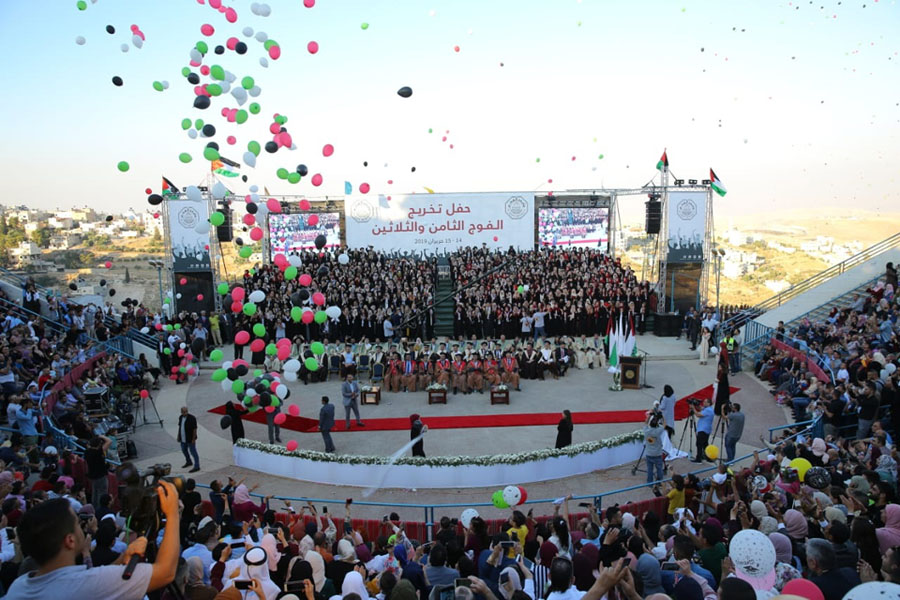 The live-streamed ceremony featured speeches by the Board of Trustees, university President, and representatives of the graduating students. Certificates were conferred to the graduates, and Palestinian traditional dances and music were also performed in the two-day ceremony.

He noted that he is especially proud of Al-Quds as a Palestinian university that carries the Arabic name of the Holy City. He praised the university for its outstanding successes in meeting all the challenges, contributing to building the scientific and professional capacities of the Palestinians, and becoming a distinguished cultural and academic household for science and knowledge that provides its students with an apt environment and various academic opportunities to excel and serve their society. Dr. Ahmed Qurie particularly applauded Al-Quds University for its crucial role in preserving the Arab identity of Palestine and supporting Palestinians in their struggle to persist and continue to live on their land.

In his speech as leader of the university’s community, Professor Imad Abu Kishek congratulated the graduates and their families, saying: “Today we are very pleased by our sons and daughters, the wonderful graduates of the 38th class”.

Abu Kishek noted some of the big achievements and advances the university has made, which are “fruit of the continuing strategy of international engagement, joint academic and research cooperation, and faculty and student exchanges with prestigious and high ranking universities and research centers around the globe”.

In respect of this, Abu Kishek cited some of the institutes and centers that Al-Quds University has established within its internationalization program, including the Institute of Competiveness that was created in partnership with Harvard University, the Chinese Language and Culture Institute, known as the Confucius Institute, and the Indian-Palestine Center of Excellence in ICT (IPCEICT).

In speaking about the collaboration between Al-Quds University and the Palestinian private sector, Abu Kishek emphasized the university’s strategy of linking the educational outcomes with the needs of the market by implementing a unique educational system that links theory with practice through providing the students with field training at the private sector’s companies. Abu Kishek added that the university’s newly-established entrepreneurial business incubators would help the graduates transfer their creative ideas into real economic projects.

Describing them as a “strategic asset” for the university, President Abu Kishek called on the graduating students to utilize the knowledge and skills they had acquired in the process of developing their society and building a better future for Palestine. He cited the legacy of the university’s founders when he urged the graduates to use their gifts to change Palestine for the better, to pursue knowledge and embrace lifelong learning, and to engage in an ongoing process of development.

Member of the Board of Trustees Mr. Munib Rashid al-Masri, for his part, commended the university’s leadership for its pivotal role in promoting innovation and scientific evolution both locally and internationally. He echoed President Abu Kishek in calling on the graduates to pursue the mission of continuing learning and development for the benefit of themselves and their country.

In their speeches on behalf of the graduates, three of the students articulated their experiences at Al-Quds University. They said that the university offered them every support to realize their ambitions and transform their dreams into realities. They explained how the university, its leadership, faculty, and staff, “was always there to help us overcome difficulties, build our characters, and acquire the knowledge and skills we will need to handle the future.

At the end of the event, certificates were conferred to the graduates from over 150 Bachelor and Master’s programs.