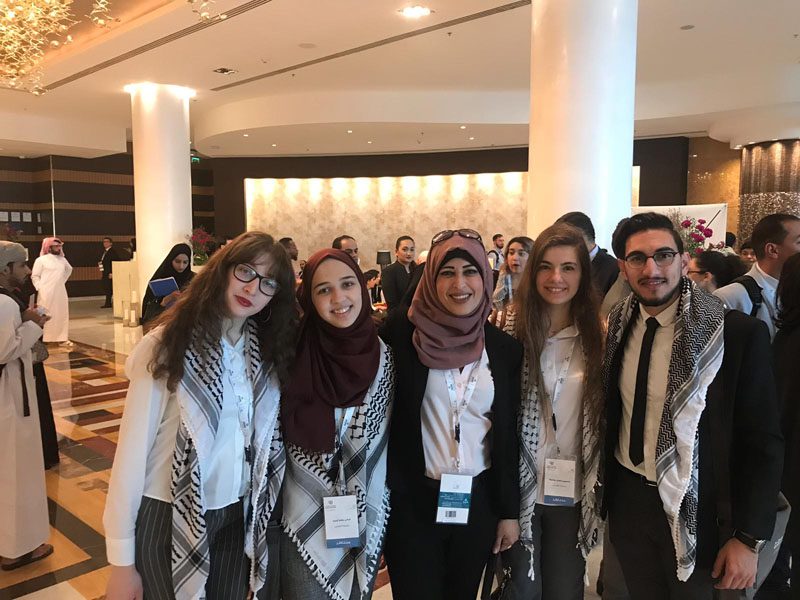 JERUSALEM | Al-Quds University’s debate team was at the forefront locally and internationally in the 5th International Universities Debating Championship which was held in Qatar between March 16th and 20th. The university’s team that participated in the competition came first among fellow Palestinian universities’ teams and ranked amongst the top ten internationally.

This year, 107 teams from 51 countries took part in the annual championship which saw rigorous competition by the participating teams that represented Arabic and Non-Arabic speaking countries. The debates featured a number of several social, economic, and political topics of interest that were chosen by special committee of referees.

During the competition, Al-Quds University’s team demonstrated outstanding debating skills, and was specially recognized for the teammates’ abilities to articulate well-rounded arguments and respond with persuasive rebuttals on the issues that were presented for discussion. Furthermore, the well-prepared participants from Al-Quds University were able to use high-standard and elevated Arabic language that was free of vernacular Arabic.

President of Al-Quds University Professor Imad Abu Kishk congratulated the university’s team that participated in the championship, wishing the participants further success in developing their debating and language capacities as individuals and members of society. He pointed out that the excellence of Al-Quds University’s students in international competitions is evidence of the continuous progress AQU has made over the years. Praising the genuine efforts of its faculty and students, Abu Kishek added that “Al-Quds University is a scientific beacon that started in Jerusalem to serve its cultural heritage and community”.

The Qatar tournament is the largest and broadest Arabic language debating competition in terms of participation, quality of programs, and level of debaters, coaches, and referees. It aims to promote Arabic as a language of innovation and to provide Arabic-speaking young adults with the opportunity to engage in intercultural discussions and well-reasoned communication. It is designed to develop the student’s critical thinking and listening and debating skills to elevate Arabic language performances.

Al-Quds University’s Debate Center strives to recruit as many of its brilliant students as possible to participate in such events in order to help them evolve their potential for work and development by fostering a culture of constructive and logical argumentation for debate. Thus, the university’s Debate Center features a highly accomplished and dedicated coaching staff  led by Dr. Rania Muhtadi who works with the team to acclimate debaters to national and international debating events.

A winner of “Pioneers Award”, Al-Quds University’s debate team will be presented as one of the new Qatar Debate Ambassadors, besides winning the championship trophy.

Al-Quds University seeks to continue to participate in Qatar’s International Universities Debating Championship that is organized annually to allow university students from all over the world to learn about global cultures and actively participate in the art of debate. As a challenging experience, the championship motivates participants to work harder, develop their personalities, strengthen self-confidence, and give them the opportunity to recognize and respect others' opinions.