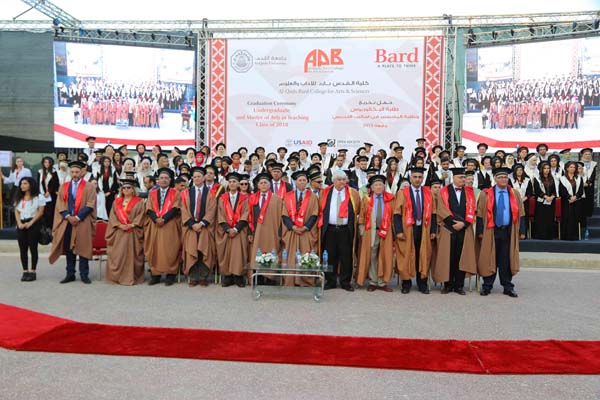 JERUSALEM – The successful partnership and 10-year-long special friendship between Al-Quds University and Bard College (New York) was celebrated at a graduation ceremony for both bachelor’s and master’s students at Al-Quds Bard College for Arts and Sciences. At a festive event which included Palestinian folk dancing and dozens of high-level educators and politicians, President of Al-Quds University Professor Imad Abu Kishek called on the students to invent new concepts and standards that would solve challenges facing Palestinian society and around the globe.

“Al-Quds University has provided the world with hundreds of graduates who could make positive and qualitative change in their societies both in Palestine and the broader world,” said Professor Abu Kishek.

Deputy Minister of Education and Higher Education Dr. Basri Salah, who attended the commencement on behalf of Palestinian Education and Higher Education Minister Dr. Sabri Saidam, praised the ‘creative academic model’ adopted by Al-Quds University, saying it could be seen in the innovation coming out of Palestine and reaching "every corner and platform in the world." He also extended his appreciation to Professor Abu Kishek and his academic staff for their endeavors in building a better future for Palestine given the unique conditions on the ground.

In that context, Professor Abu Kishek praised and thanked Palestinian Minister of Education and Higher Education Dr. Sabri Saidam for his support and dedication to the cause of education in Palestine. Professor Abu Kishek also reiterated Al-Quds University’s commitment towards developing the education system in Palestine.  “On this day we celebrate the major achievements we have made in a decade,” he added. 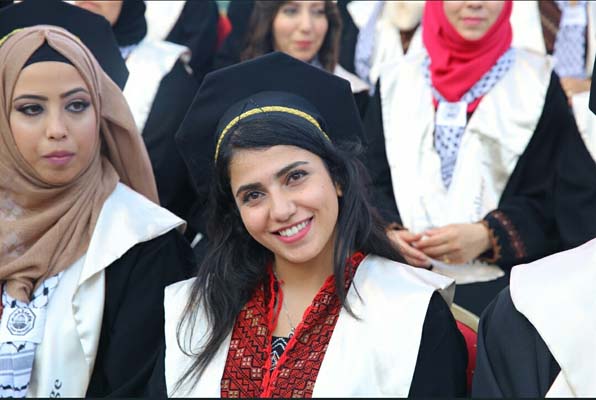 In 2009, Al-Quds University combined with Bard College in Annandale-on-Hudson, New York to open Al-Quds Bard College — the first of its kind liberal arts school in the Middle East. Out of the roughly 5,000 universities in the United States, Bard College is the only one that has a dual degree program with a Palestinian university.

At the graduation ceremony, which saw the attendance of hundreds of students and their families, academics, and other guests, Bard College President Professor Leon Botstein echoed Professor Abu Kishek’s sentiments of being proud of the achievements made by Al-Quds Bard College over the years.

“Ten years ago, we started thinking of a creating a joint partnership between America and Palestine in order to spread peace in Palestine,” said Professor Botstein, adding that he was looking forward to seeing more achievements in the next ten years.

Offering him an accolade, Professor Abu Kishek expressed his gratitude to the Bard College president for his leadership and vision in working with former Al-Quds University President Professor Sari Nussibeh to establish the college.

Seventy-two graduate students received MA degrees in the art of teaching along with thirty-one undergraduate students who earned their Bachelor’s in arts and sciences.  The program also featured the Palestinian Asayel Folklore Troupe.

“Al-Quds Bard College provided us with intellectual and cultural freedom and taught us to respect our differences in light of our common goals to fight for freedom, dignity, equality and self-determination in order to eradicate poverty, disease and corruption,” said Shaath Gannam, one of the graduating Bachelor of Arts students.

Master’s graduate Emya Qumsiyeh thanked her professors and colleagues for their psychological support and said the higher education program at Al-Quds Bard College was full of “positive energy that enabled us to achieve our goals.”

For his part, the newly appointed Dean of Al-Quds Bard College Professor Daniel Terris offered his utmost appreciation to his predecessor Dr. Munther Dajani, who was honored for his dedication and contributions over the last ten years. 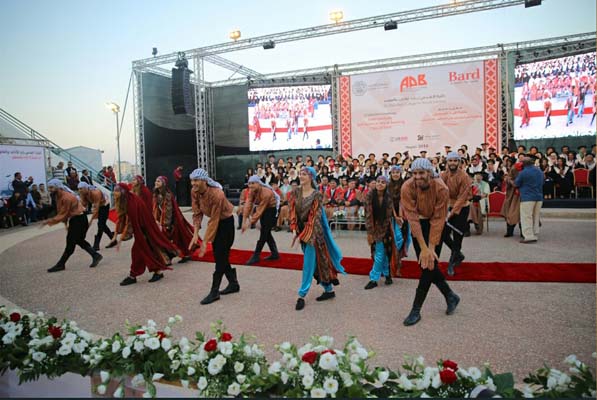 Joy and enthusiasm swept across the University’s Roman-style open theatre that hosted the ceremony. These sentiments were clear in Dean Terris’ voice and words. “I am excited to join this extraordinary community of scholars and students who represent the highest achievements of learning, and the dedication to use their learning to create change in their communities and in the wider world”, said Terris in his address to the graduating class.

Al-Quds Bard College for Arts and Sciences is the first in the region to offer graduates a US and a Palestinian degree – both at the Bachelor's and at the Master's level. The partnership between Al-Quds and Bard College seeks to help realize the two institutions' shared educational goals in ways that are effective and sustainable, and that contribute to systemic improvement of the Palestinian education system. The partnership is a source of invaluable knowledge and experience for the international faculty, students, and institutions involved in the exchanges, as well.

Al-Quds University is a research-intensive university based in Jerusalem, Palestine.  Established in the late 70’s, Al-Quds remains the only Arab university in the city of Jerusalem. It currently offers 105 undergraduate and graduate degree programs, taught through its fifteen degree-granting faculties and institutes.