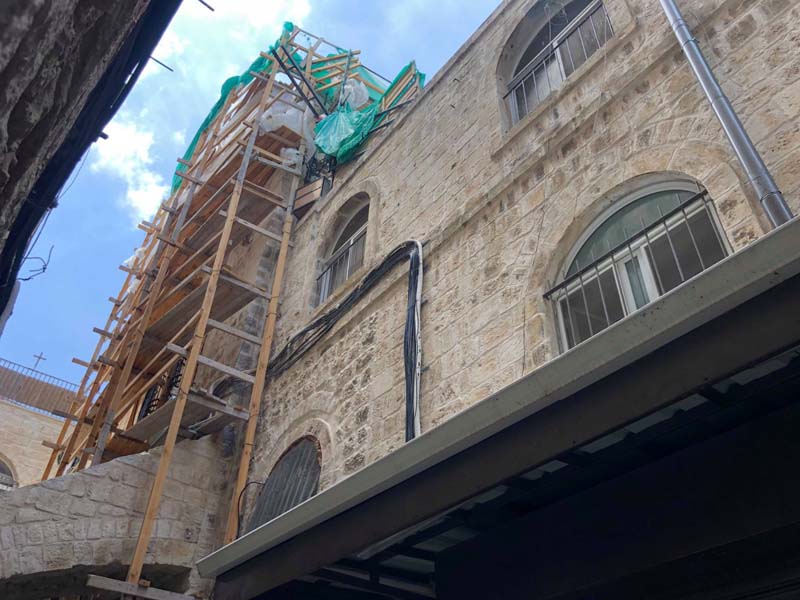 JERUSALEM | Under the auspices of  President Professor Imad Abu Kishek, Al-Quds University (AQU) recently celebrated the restoration of 45 housing units at the site of Dar Al-Consul Compound in the Old City of Jerusalem.

The current project is undertaken in partnership between the AQU, the Custody of the Holy Land, and the UN Habitat that is implementing the project which is sponsored by the European Union.

Prof. Abu Kishek extended his gratitude to the parties involved in the project that embodies the university’s schemes of conserving the historical and cultural heritage of Jerusalem. He noted that AQU has been exerting tremendous efforts to restore this site as a part of its strategy to provide vital services to the Arab community of Jerusalem and to preserve its Arab historical significance.

Prof. Abu Kishek reiterated that AQU has since its early days assumed the responsibility of conserving Jerusalem’s heritage and maintaining its Arab identity. In this context, he cited the Annual International Competition on Civic Engagement, which was organized by the Arab American University in Cairo in 2017, as one of the occasions when AQU won first prize for being ‘the most socially responsible university in the Arab world’.

Representative of the European Union in the West Bank Mr. Joris Heeren said he was delighted for accomplishing this project which contributes greatly to conserving the historical and cultural heritage of Jerusalem and prepares the site to accommodate cultural and educational activities for the benefit of the Arab residents of the city.

It is worth noting that the project of restoring Dar Al-Consul Compound was launched in 2014. Since then, AQU has employed all its relevant academic and administrative teams to bring this project to success. Supervised by Dr. Yara Saifi and Dr. Maha Samman, the students of Architectural Engineering at AQU presented 3D designs for the compound that were highly valued by the partners.

Dar Al-Consul Compound was the residence of one of the German consuls in the past times. The successive civilizations Jerusalem witnessed in the past have left their aesthetic touches in the architectural details of the compound, which gives it a great symbolic importance.

With plans to rehabilitate additional facilities of Dar Al-Consul Compound in the near future, the large scale project is a pioneering one, and it demonstrates an advanced model for development within the Old City of Jerusalem.

AQU’s continuing efforts to restore Dar Al-Consul Compound and other historic sites in the Old City of Jerusalem are in line with the multitude of initiatives the university has been leading in Jerusalem through its numerous centers to provide pro bono services to the Jerusalemites, including legal consultations and social counseling.