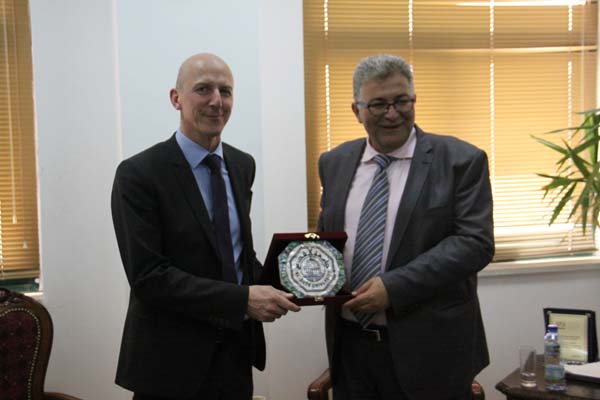 JERUSALEM – In Al-Quds University’s ongoing endeavors to enhance ties with universities around the globe, President Imad Abu Kishek received the Swiss representative to the State of Palestine, Mr. Julien Thöni, and discussed with him ways to further scientific cooperation between the university and the higher education institutions of Switzerland.

“We engaged in a discussion session that deeply explored a multitude of creative initiatives between Al-Quds University and our Swiss friends both scientifically and academically in the near future,” said Professor Abu Kishek after the meeting which also included a discussion of Palestinian-Swiss relations.

Mr. Thöni praised the efforts exerted by Al-Quds University to enhance collaboration between both sides and also complimented the university on its continuous achievements in research and academia.

The high-ranking Swiss official added that he had asked to visit Al-Quds University to get an up close and personal look at its academic programs, colleges, and centers so as to advance partnerships. In that context, the Swiss representative to Palestine stressed the need for proposals to create real joint projects between Al-Quds University and higher education institutions in Switzerland.

Professor Abu Kishek also briefed the Swiss representative to the State of Palestine, Mr. Julien Thöni, on the multiple services Al-Quds University provides to the Palestinian community, particularly those living in Jerusalem.  The meeting concluded with a history of the university and the progress its faculties and academic programs are witnessing, despite the turbulent political situation, in addition to the numerous academic and student exchange programs and joint scientific researches Al-Quds University has with the international community.