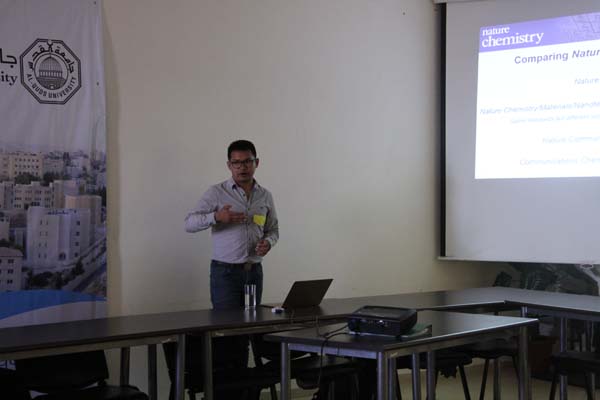 JERUSALEM – As a leading body in the field of scientific research and as part of its ongoing mission to provide a first class higher education, Al-Quds University hosted Nature Chemistry’s senior editor, Dr. Xin Su, who exclusively shared with academics, students, and researchers his experience as a scientific editor and the skills required to get scholarly research papers and articles published by global journals.

“One of the entitlements of Al-Quds University is to host prominent scholars from all over the world to come to Palestine's Jerusalem capital where the university is based,” said President Imad Abu Kishek who extended his sincere gratitude to Dr. Su and the leading international scientific journal of Nature Chemistry, a monthly journal dedicated to publishing high-quality papers that describe the most significant and cutting-edge research in all areas of Chemistry. “Our graduates go on to work in their fields, but by organizing such lectures on campus, we really embolden our students and researchers to proactively contribute not only to the development of our society but also to the benefit of all mankind”, added Professor Abu Kishek.

Dean of Scientific Affairs, Dr. Elham Khatib, shared the same sentiments when she said that these ongoing lectures at Al-Quds University by renowned intellectuals are an integral part of the university’s curriculum.

In his detailed lecture titled “How to Publish in Nature”, Dr. Xin Su discussed and in his words, “demystifies the publishing process at Nature Publishing Group.”  From describing the mechanisms of submission and review to a discussion of what the editors at Nature Chemistry are looking for in articles pursued for publication, the presentation sought to clarify how and why a paper goes from new submission to accepted articles. Dr. Su concluded by mentioning the do’s and don’ts of responding to potential publishers and the methodology adopted by the staff of Nature Chemistry.

“Nature Chemistry senior editor’s lecture functions as a further step towards enhancing bilateral ties and cooperation between Al-Quds University and local and international publishing houses, while at the same time encourages robust academic and research exchanges,” said Dr. Khatib who is also a diplomat at the American Board of Public Health Dentistry and a member in the International Dental Federation (FDI) Public Health Standing Committee.

Al-Quds University has always been a catalyst of research initiatives at the regional level.  With its unique research centers, such as the Nanotechnology Center, its researchers’ multifaceted achievements in the fields of Medicine, Biology, and Humanities have allowed it to be listed in the Quacquarelli Symonds (QS) World University Rankings.

According to his published biography, Dr. Xin Su received his BSc in Chemistry from Nankai University in 2009. He then moved to the USA and conducted graduate research on Hydrazone-based molecular switches and functional materials at Dartmouth College where he received his PhD in Organic Chemistry in 2013. Following postdoctoral training at the National Energy Technology Laboratory in Pittsburgh, he joined Wiley's Hoboken office in 2015, first as an associate editor and then as a deputy editor, working on a range of topics in materials science. Dr. Xin started at Nature Chemistry in April 2017 and is currently based in the Shanghai office.