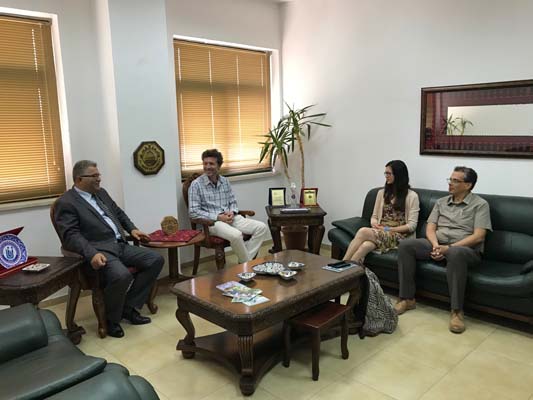 “While Al-Quds University has one of the leading models on this critical subject, our work in this field extends beyond the gates of this academic institution. Our vision seeks to contribute to discovering solutions to various challenges facing the Palestinian society and humanity as a whole,” said Professor Abu Kishek after meeting with the delegation visiting Palestine to participate in a scientific symposium hosted by Al-Quds University’s Palestinian Neuroscience Initiative (PNI).

Dr. Bloodgood, a Searle and Pew scholar and the recipient of an NIH New Innovator Award, and Dr. Scanziani, an investigator with the Howard Hughes Medical Institute, both expressed their elation for visiting Al-Quds University and participating in the PNI’s scientific symposium. The two California researchers emphasized their aspirations to explore the possibilities of cooperation with Al-Quds University in the field of neuroscience.

Professor Abu Kishek briefed the top California neuroscientists on Al-Quds University’s achievements in scientific research amid atypical circumstances stemming from a volatile and uncertain political situation. He also spoke of how Al-Quds University was the first university in the Middle East to offer the combination of specializations it provides.

Following their participation in the symposium on neuroscience, the visiting neuroscientists both expressed their deep admiration for the profound level of dialogue exchange, particularly the questions raised by Al-Quds University academics and researchers.