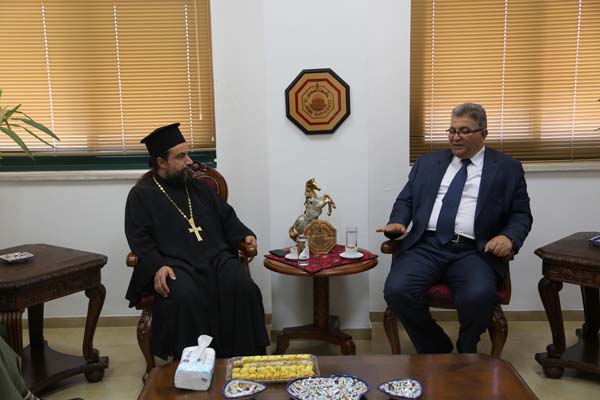 JERUSALEM – In devoting a large portion of its scientific and human resources to excavate the site of Khirbat al-Tira in Ramallah, Al Quds University has once again demonstrated the responsibility it shares in preserving Christianity in Palestine and archaeological sites as a whole. The effort also intended to enable the site to once again receive tourists and Christian pilgrims

“Respect of holy, historical sites does not fall on one particular religion alone. It’s the obligation of all faiths to act as custodians because Palestine has always been a symbol of tolerance” said Dr. Imad Abu Kishek following his meeting with spiritual leader of the Roman Orthodox Church in Ramallah  Archimandrite Elias Awaad.

Often, historical sites are unfortunately not guarded and as a result face destruction. Author Salah H. A. Al-Houdalieh has written numerously about the challenges archaeological heritage faces due to looting of antiquities that causes partial and full damage and extraction of thousands of heritage objects.

“These sites are not to be taken for granted. For Al Quds University to join the Netherlands and other local and international partners in this quest to preserve Khirbat al-Tira, is a clear signal that our attitude towards caring for these sites is a positive one loaded with deference,” he added. The site is located in area where Palestinians have no control and little access, known as Area C. Under Oslo Peace Accords signed in 1993, Israel is supposed to gradually transfer all powers that have to do with archeology to the Palestinians. But this has yet to happen. In order to work in these areas, Palestinians are required to apply for permits from Israeli Authorities.

Dr. Abu Kishek commended the activities by the Orthodox Church. He also discussed with Archimandrite Awaad ways of enhancing cooperation at that and other historical sites.

Archimandrite Awaad expressed his deep appreciation to the university president for the university’s efforts in preserving such archeological treasures. Khirbet Al-Tireh is believed to be the first burial place of the first Christian martyr, Saint Stephen.

Al-Quds University (AQU) is a national research university based in Jerusalem, Palestine.

Established in 1984 as the only Arab university in the city of Jerusalem, AQU currently offers 93 undergraduate and graduate degree programs, taught through its fifteen degree-granting faculties.