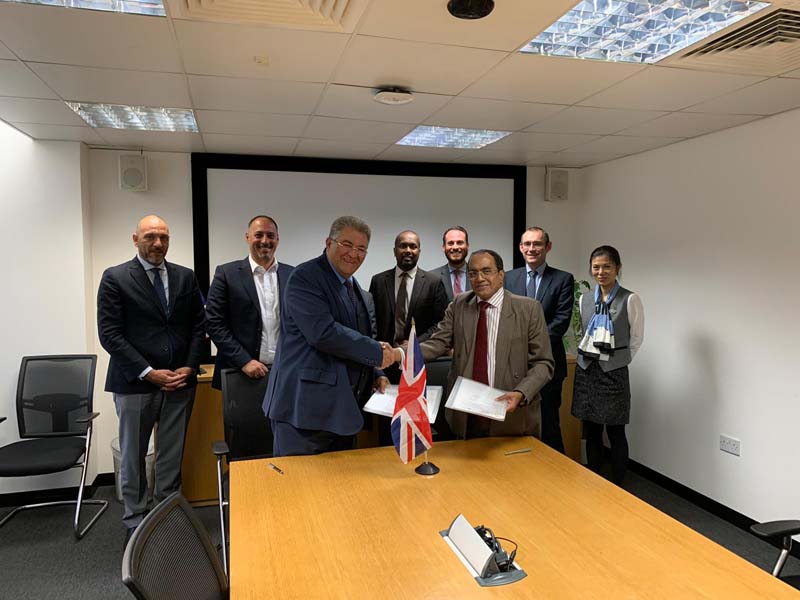 LONDON | In another unique contribution to higher education in Palestine, Al-Quds University (AQU) concluded an important agreement for academic cooperation with London School of Commerce (LSC), that will lead to the creation of a joint MBA program between the two institutions.

The program aims at providing the market with business administration specialists who are equipped with the practical and administrative knowledge and experience that are highly demanded by the different companies and institutions. It will target individuals aspiring to succeed and excel in their future careers and perform according to international business criteria.

Professor Abu Kishek said that the MBA program will contribute to the advancement of the business sector in Palestine by targeting the students who are well-versed in the skills required for the management, planning, implementation, supervision, and development of their theoretical knowledge and practical experience.

He noted that the newly-forged partnership between AQU and LSC is an outcome of the networking effort the University has been exerting in the United Kingdom, which correlates with the university's strategy of expanding cooperation at all scales with international academic institutions.

Dr. Andrade said that the joint MBA is a response to the global advances in the area of trade, which in turn promotes development in Palestine and prepares Palestinians involved in the business sector to better compete worldwide.

Expressing his enthusiasm for this promising partnership, Dr. Andrade praised AQU for its advanced academic programs that make use of the various resources available in Palestine and abroad.

Marketing Director at the London School of Commerce Mr. Sameeh Zomlot said that the signing of the agreement came as a result of thoughtful consideration by both institutions of the pressing need to launch this program in Palestine, noting that it will help foster the students’ scientific and practical skills, which consequently enhances Palestinian economy.

As a graduate program, the Master of Business Administration is the most sought after in the business arena, especially in the area of the management of companies and projects of massive production and service. Besides, graduates of this field of specialization nowadays occupy key positions in world financial and business markets, a fact that that makes it one of the most important practical fields.

Under the agreement between AQU and LSC, instruction will be according to the highest of the international standards. Students enrolled in the program will be taught by professors from both universities, and they will receive two certificates on graduation, one from AQU and another from LSC, with an opportunity for spending a whole semester at LSC in London.

Located in the heart of London, the London School for Commerce is a private college of higher education. It is accredited by the British Accreditation Council, and it maintains academic collaboration and partnership ties with many national and international universities and colleges.

Al-Quds University has been the first in the region to forge partnerships with universities and higher education institutions in many regions of the world. In 2009, AQU partnered with Bard College in New York to establish Al-Quds Bard College for Arts and Sciences. The Dual Studies program, which was established in collaboration with the German government in 2015, combines theoretical education at the university with practical application at the private sector’s companies. Established in 2015, the Confucius Institute was, and is still, the first Chinese language and culture institute to be founded in Palestine.