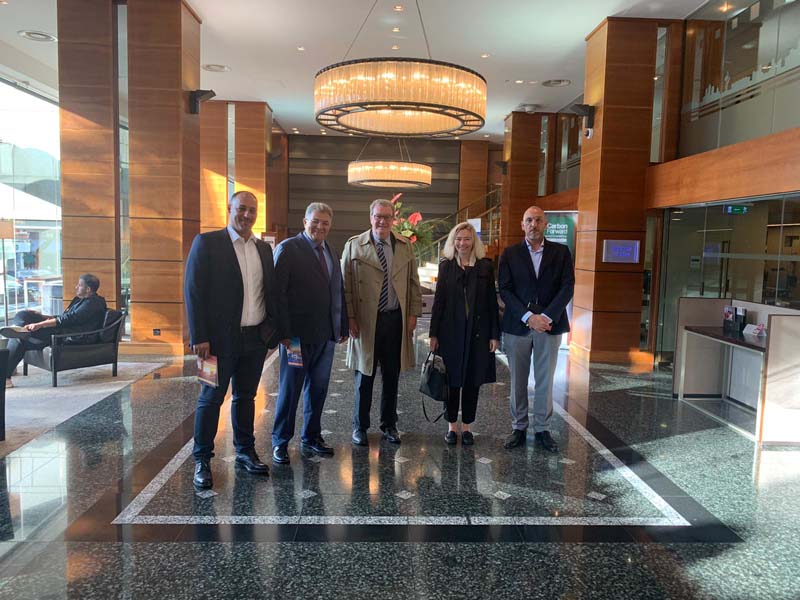 LONDON | In a meeting held in London, the President of Al-Quds University (AQU) Professor Imad Abu Kishek and the Executive Chair of the International School for Government at King’s College London Mr. Alexander Downer agreed to collaborate in a number of graduate programs offered by both institutions.

Under the agreement, a number of AQU’s MA programs in the area of Development and Institution Building will benefit from the academic programs offered by the International School for Government at King’s College London. Based on this, selected courses taught at King’s College will be included into the study plan for the Master of Development and Institution Building of Al-Quds University.

Professor Abu Kishek said that cooperation between AQU and King’s College will help develop AQU’s academic programs, which in turn provides the Palestinian public sector with further qualified cadres. He noted that the university “always seeks to promote graduate studies in Palestine through its extensive network of academic and research linkages with prestigious international universities”. In this context, President Abu Kishek extended his gratitude to Palestine’s Ambassador in London Mr. Husam Zomlot for facilitating cooperation between AQU and King’s College.

Abu Kishek, accompanied by AQU’s Vice President for Development and Communications Mr. Laith Arafeh, concluded this agreement as part of a tour of a number of British academic institutions to discuss cooperation in areas of mutual interest.

“King’s College London is one of the leading universities in the world, and among the oldest universities in England. Based in the heart of London, King’s College has an outstanding reputation for world-class and cutting-edge research. The International School for Government fosters a new way of governing well, equipping leaders from across the globe with the necessary hard and soft skills to meet the most contemporary challenges”, according to the college’s official website,

Al-Quds University is a research-intensive university based in Jerusalem, Palestine. It currently offers 120 undergraduate and graduate degree programs, taught through its fifteen degree-granting faculties and institutes. As part of its internationalization strategy, the university maintains strong relationships with a wide range of universities and research centers across the world.