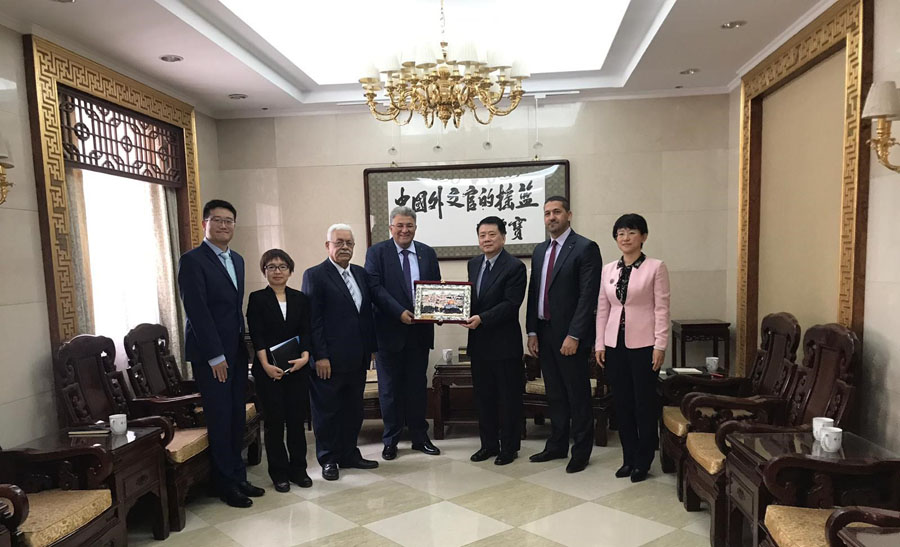 Professor Abu Kishek pointed to the importance of this understanding with China Foreign Affairs University (CFAU), which is considered one of China’s prestigious institutions of higher education. Renowned for its rigorous programs and selective admissions criteria, CFAU has an overall enrollment of less than 2000 undergraduate students and 100 postgraduates. With eight departments and one specialized institute focusing on education and research, CFAU offers a range of BA, MA, Ph.D. and double-degree programs. Affiliated with China’s Ministry of Foreign Affairs, CFAU was the first Chinese university to offer Diplomatic Studies as a major at the undergraduate level, and was amongst the first to confer Ph.D. and master degrees in international relations and diplomatic studies.

Professor Abu Kishek stressed that Al-Quds University (AQU) has been keen on building strategic partnerships with leading universities from across the globe as part of AQU’s internationalization efforts, which aim at exposing its students and academics to the best educational and research traditions in the world of academia. As such, AQU has been actively engaged in several cooperation schemes with Chinese universities of which “Al-Quds University is especially proud and aspires to expand”, added Professor Abu Kishek. The aim of such joint programs according to Abu Kishek is to offer quality educational programs on par with the world’s highest academic standards.

The meeting between the presidents of the two universities was part of Professor Abu Kishek’s official visit to China, during which he signed several academic collaboration agreements on behalf of Al-Quds University with Chinese institutions of higher education. This recent understanding reached with the President of the CFAU should add significant value to the network of international partnerships  which Al-Quds University maintains with prestigious universities and research centers on all five continents. Such partnerships provide unique educational and research opportunities that benefit students, academics, and researchers from the partner universities.

It is worth noting that Al-Quds University maintains active collaboration programs and cooperation agreements with several universities and research institutes in China. Perhaps the most noted example of the success of this growing cooperation between Al-Quds University and its Chinese counterparts is the establishment of the Confucius Institute at AQU, which remains the first Chinese language and cultural institute in Palestine. Established in 2015, the Confucius Institute at Al-Quds University serves as a cultural center that offers a range of language and educational programs for Palestinian students, and serves as a cultural bridge between Palestine and China.