President Abu Kishek: “The road was long and rife with challenges but thanks to the excellent teamwork and unbending persistence, we were able to push through to the end.” 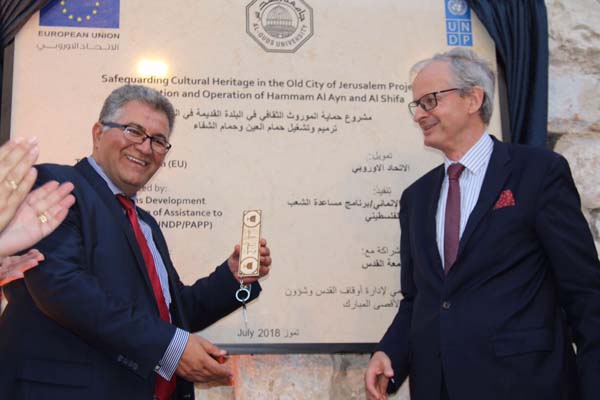 JERUSALEM – In line with Al-Quds University’s effort to safeguard the Arab cultural heritage of the Old City of Jerusalem and as part of its social impact programs, the President of Al-Quds University, Professor Imad Abu Kishek received the keys to the Mamluki Khan Tankaz site, inaugurating the completion of the EU-funded project to rehabilitate and operate the two historic hamams of Al-Ain and Shifa at that site. The opening ceremony, which was held at the historic site, saw the presence of high level diplomats from the European Union and the United Nations, as well as religious, academic, and civil society figures.

The Special Representative of the Administrator for UNDP's Programme of Assistance to the Palestinian People (UNDP/PAPP), Mr. Roberto Valent, pointed out to the economic benefits that the project will bring, the jobs it will create and the tourism it will promote. "We have a shared responsibility to preserve and revitalize this place, as Jerusalem is a cradle of civilizations,” he said at the ceremony which was also attended by Jerusalem Grand Mufti Sheikh Muhammed Ahmad Hussein, the director of Islamic Endowments in Jerusalem Sheikh Azzam al-Khatib, and the OIC representative to Palestine ambassador Ahmed al-Ruwaidi.

“I am equally grateful to the UNDP with whom we worked closely toward the realization of this dream, and the development, conservation, and restoration of the Palestinian cultural heritage in the Old City,” said Professor Abu Kishek referring to the site which was built during the Mamluki period and is located in the heart of the Old City of Jerusalem near al-Qataneen Gate which leads to Al-Aqsa Mosque.

While the UNDP was responsible for the implementation of the project, the European Union funded the restoration of the Mamluki Khan Tankaz site which includes the reopening of al-Ain and al-Shifa baths that had been closed and neglected for five decades. “I am honored to be with you and to work with Al-Quds University to rehabilitate this site,” said the Director-General for European Neighborhood Policy and Enlargement Negotiations Christian Danielsson. Over the years, the European Union has granted €25 million Euros to support Jerusalem, and, in his speech, Professor Abu Kishek said that future plans include renovating the Patriarch’s Pool in the Old City.

Late last year, Al-Quds University won first place as the most socially responsible university in the Arab world at the “Annual International Competition on Civic Engagement” organized by the American University (AUC) in Cairo.

“Al-Quds University has taken upon itself the responsibility of contributing to the development of our city and safeguarding its history, heritage and culture,” said Professor Abu Kishek whose presentation during the historic ceremony also addressed the history of the project, the role of the Jerusalem Archaeology Unit at Al-Quds University, and the difficulties and challenges the restoration had faced. To overcome these, Al-Quds University’s Center for Jerusalem Studies offers an Arabic courses to foreigners, provides scientific research and educational tours on Jerusalem and its history.

Last year, Al-Quds University launched an “innovation incubator”, the first of its kind in the Middle East, in the heart of Jerusalem to alleviate economic constraints, accelerate economic projects, and create job opportunities for Jerusalemites. The incubator will open its doors soon.