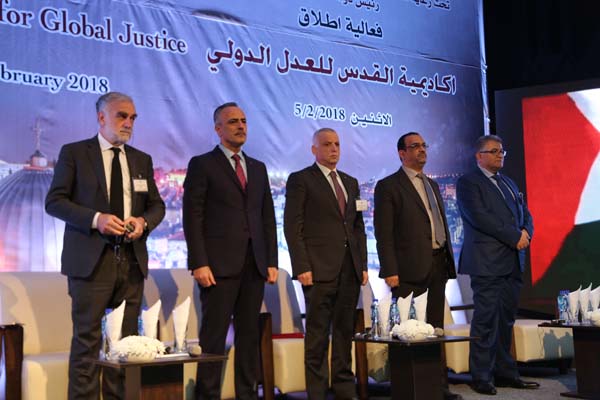 JERUSALEM – Under the patronage of Palestinian President Mahmoud Abbas and in partnership with the former founding Chief Prosecutor of the International Criminal Court (ICC) the Honorable Luis Moreno Ocampo, Al-Quds University launched Al-Quds Academy for Global Justice, a first of its kind institute in the Middle East that will focus on teaching, training, and research in the areas of international criminal law and human rights litigation.

In his keynote address at the launch, Mr. Ocampo, who will chair the Academy, described Al-Quds University as the “Silicon Valley” of peace, justice, and freedom, adding that he is “honored to be working with this exceptional educational beacon.” In addition to supervising the development of course offerings and executive programs that will be offered to students and practitioners through the Academy, Mr. Ocampo will personally teach some of these courses. The first course is to be offered in July of 2018. 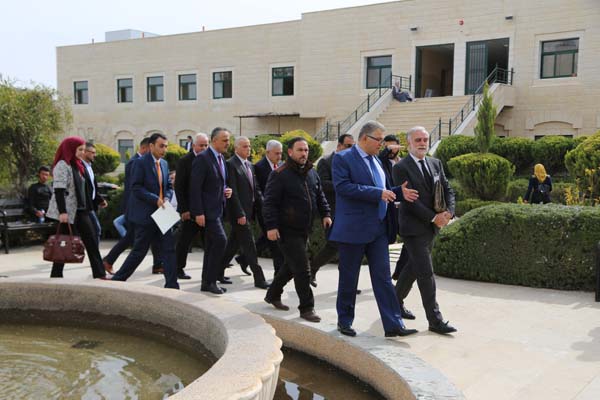 “The implementation of this Academy is just one of the initiatives led by Al-Quds University on multifaceted levels. The Academy will not only build but also develop the Palestinian capacities in vital sectors,” said President of Al-Quds University Professor Imad Abu Kishek. “Al-Quds University expresses its gratitude to His Excellency President Mahmoud Abbas for his support in making this institute a reality at a much needed time,” Professor Abu Kishek emphasized.

Palestinian Justice Minister Ali Abu Diak delivered a speech on behalf of President Abbas. He praised Al-Quds University for establishing Al-Quds Academy for Global Justice at a time when Palestine is in need for developing its capacity in the field of international criminal justice. He also expressed his ministry’s dedicated support and desire to cooperate with the institute. 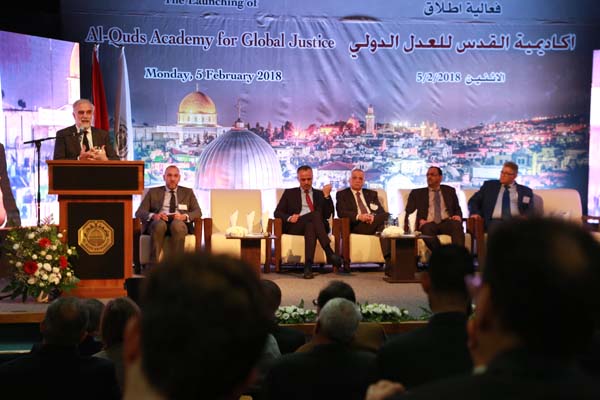 Mr. Ocampo expressed his appreciation for Al-Quds University’s commitment to the values of freedom, democracy, dialogue, and peace. He says that his commitment to this project emanates from his belief in education as a powerful tool in achieving freedom and justice. In his address at the launch, which saw wide participation from the diplomatic community and representatives of international organizations, Ocampo cited several examples of the power of education in the promotion of justice and freedom. He reminded Al-Quds University students of a lecture the civil rights leader and Morehouse College Professor Benjamin E. Mays had given to his students on Mahatma Gandhi in Atlanta, Georgia. According to Mr. Ocampo, Professor Mays inspired one of his students to lead a civil rights movement in the United States. That iconic student was Dr. Martin Luther King, Jr. Seeking to inspire the audience, Mr. Ocampo asked: “How many Martin Luther Kings are there among the 12,000 of Al-Quds University students?” 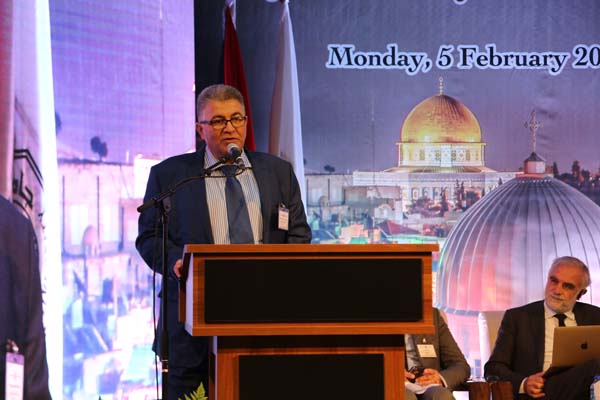 Palestine Chief Justice Chancellor Emad Saleem Sa'ad, one of many high level guests at the ceremony, said Al-Quds Academy for Global Justice will provide litigators with the tools necessary to plead cases before the ICC. The Academy will also focus on international litigation based on the Rome Statute, a treaty of the ICC that establishes the court's functions, jurisdiction and structure.

Palestine’s Attorney General Dr. Ahmad Barrak was present during the occasion and made remarks on the old and new challenges facing the Palestinian criminal justice system.

In addition to being the first ICC Prosecutor, Mr. Luis Moreno Ocampo is a Senior Fellow at the Carr Center for Human Rights Policy at Harvard University’s Kennedy School.

Al-Quds Academy for Global Justice is a newly-established educational and research institute within Al-Quds University. To be located in the Old City of Jerusalem, the Academy aims at advancing knowledge and awareness in the fields of international criminal law, international humanitarian law, human rights advocacy, and international litigation before international tribunals, particularly the ICC.

Through a set of course offerings and executive training programs designed and implemented by Mr. Luis Moreno Ocampo and both Palestinian and international experts, the Academy will train Palestinian as well as international students, practitioners, and lawyers in the aforementioned fields.

Al-Quds University is a collegiate research based in Jerusalem, Palestine.  Established in the late 70’s, Al-Quds remains the only Arab university in the city of Jerusalem. It currently offers 105 undergraduate and graduate degree programs, taught through its fifteen degree-granting faculties and institutes.

Al-Quds University Leads in Palestine with Online Classes for Refugees