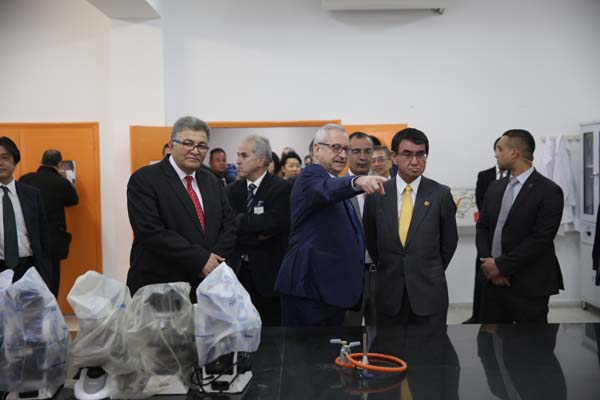 “Al-Quds University represents a positive example of the assistance that the Government of Japan extends to the Palestinian people, and we thank you for using it effectively,” said His Excellency Minister Mr. Taro Kono following his meeting with the President of Al-Quds University. He also said the Japanese Government will provide more assistance and hopes it will be used in the ‘same effective way.’ 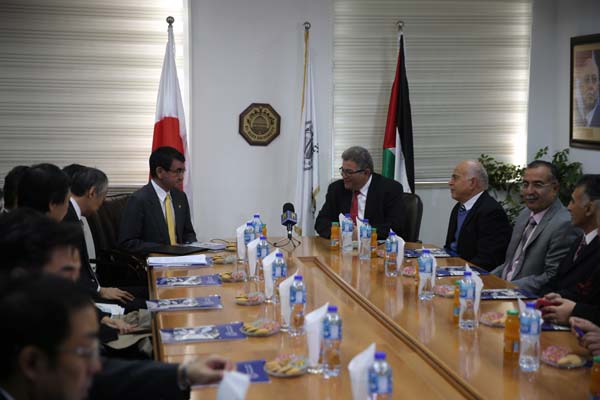 President of Al-Quds University Imad Abu Kishek extended his deepest appreciation to His Excellency Mr. Kono, the accompanying Japanese delegation and the Government of Japan for “standing with the people of Palestine.”

Dr.  Abu Kishek also told the Japanese Foreign Minister that Japan’s contribution has allowed Al-Quds University Medical Complex to “play a pivotal role in the improvement of the quality of health care in the occupied territories, which has for long been underserved and neglected.”

“We cannot properly express what your being here means to us. We are honored to know that Al-Quds University has you as a friend. This is a sign of the strong strategic relationship between Al-Quds University and the government of Japan, one that continues to flourish,” said Dr. Abu Kishek.

The president also updated His Excellency Mr. Taro Kono about the services Al-Quds University continues to provide to the Palestinian people in Jerusalem and the rest of Palestine. He praised the ongoing efforts of the Japanese Ambassador to the State of Palestine Mr. Takeshi Okubo.

“I also wish to thank you for Japan’s support of Palestine and the just cause of peace in the region, as embodied by Japan’s recent vote in the United Nations,” the President of Al-Quds University said, referring to last Thursday’s UN General Assembly motion against the US’s recognition of Jerusalem as Israel’s capital.

Founded in 1994, the School of Medicine at Al-Quds University was the first to come to light in Palestine. The Medical Complex now holds the schools of Dentistry, Pharmacology, Health Professions, and Public Health, in addition to the various health services presented to the Palestinian community.

Al-Quds is a collegiate research university based in Jerusalem, Palestine.  Established in the late 70’s, Al-Quds remains the only Arab university in the city of Jerusalem. It currently offers 93 undergraduate and graduate degree programs, taught through its fifteen degree-granting faculties and institutes.