Abu Jihad Center and Museum for Captives’ Movement was established in 1997, at the initiative of Dr. Fahed Abu Alhaj, and the support and encouragement of Prof. Dr. Sari Nusseibeh, President of Al-Quds University. It was based in Ramallah, until the inauguration of the new and current building of the Center on 16/4/2007 in Al-Quds University main campus. The aim of the Center is to document the history and struggle of the Palestinian captive movement and to preserve it from loss and oblivion and to introduce it locally and internationally as a symbol of freedom and love of life.

Vision of the Center:

The Abu Jihad Center seeks to become a leading center in the service of the captive national movement by preserving its intellectual, cultural, literary and artistic heritage, and maintaining it so that the Palestinian prisoners remain the brightest part of the Palestinian people’s memory.

The Mission of the Center:

Collecting the national heritage of the Palestinian detainees from the period of the British Mandate 1917-1948 to the Israeli occupation of the rest of Palestine in 1967 until now, and working on managing this national heritage after collecting and presenting it to the world as an integral part of the heritage of the Palestinian people, and that Abu Jihad Center to be the first reference to researchers in the walks of experience of the captives’ movement.

Activities of the Center:

(A) Collecting information continuously about the captives, including their testimonies, their intellectual and artistic achievements, and their life and struggle in the Israeli jails.

B – The museum has held dozens of exhibitions about the captives locally and internationally and participated in many workshops and events related to the captives.

C- The museum also works to strengthen its relations with civil society institutions and those concerned with the issue of prisoners and liberties locally and internationally through its website, which is constantly being updated.

The Center building and departments:

The center consists of three floors displaying pictures and works of art and contains a library and an electronic archive of cultural and legal materials. 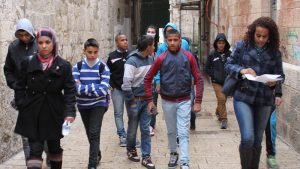