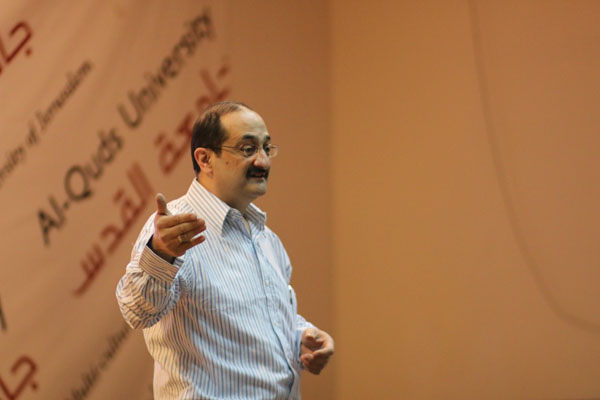 A "Language and Thinking" session was held on Sunday, January 14th, at Al-Quds University campus in Abu Dis, on the topic of "creativity." The session was designed to increase students' confidence in their own abilities and in their potential to use inner mental and physical strength for creativity.

The meeting was held as one of a series of sessions on "Language and Thinking" in the College of Arts and presented a number of examples of ideas that were ridiculed in past civilizations but have now become realities due to human creativity. One such example is the story of Abbas Ibn Firnas and his attempts at flying, which was considered evidence of insanity in his time.

Al-Quds University Professor Ala’ Anwar defines “creativity” as the process of producing something that is both original and worthwhile or something that is characterized by originality, self-expression, and imagination. Every human being has an inner creativity, regardless of his or her other physical or intellectual abilities.

Professor Anwar believes “there is nothing impossible as long as the will of the human mind exists. Humans consist of spirit, body, and mind that together can generate creativity.”