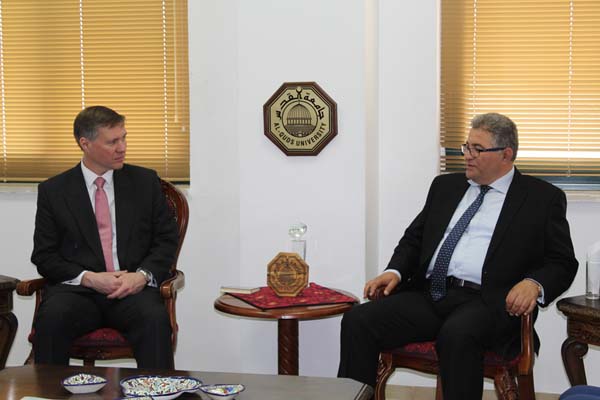 JERUSALEM – President of Al-Quds University Professor Imad Abu Kishek received the British Consul-General in Jerusalem Mr. Philip Hall OBE and updated him on the progress at the academic and research levels during a visit that also included a tour of the university’s facilities and projects which left a deep impression on the senior UK official who said it was an “enormous pleasure to be here.”

"I think the honor really is mine. I’m very impressed by the positive attitude, the hope that I see here, the belief in academic excellence. And it’s very nice to see,” said Mr. Hall.

Professor Abu Kishek extended his genuine appreciation to the British diplomat for coming to Al-Quds University.

“It’s a privilege to be here to see the fabulous university you have here,” the British official said.

Professor Abu Kishek informed Mr. Hall about the various initiatives being undertaken by the university and also provided him with a brief on the obstacles faced on a daily basis, in spite of which Al-Quds University has advanced academically.   After the meeting, Mr. Hall said the education of the students is critical.

“I suppose that all our futures depend on studies that students do, how they learn and then how they apply their studies. But I think my only message to them would be good luck. Enjoy it, too,” said the British Consul-General.

Mr. Hall also hinted at the possibility of future direct cooperation between the British Government and Al-Quds University, saying “you never know what may come in the future”.

Al-Quds University is a research university based in Jerusalem, Palestine.  Established in the late 70’s, Al-Quds remains the only Arab university in the city of Jerusalem. It currently offers 105 undergraduate and graduate degree programs, taught through its fifteen degree-granting faculties and institutes. The university was the first in Palestine to establish unique schools and programs — medicine, dentistry and the program of Dual studies among them. Al-Quds University is also distinguished for its wide array of international relations that are utilized to provide students and researchers with knowledge from all over the world.