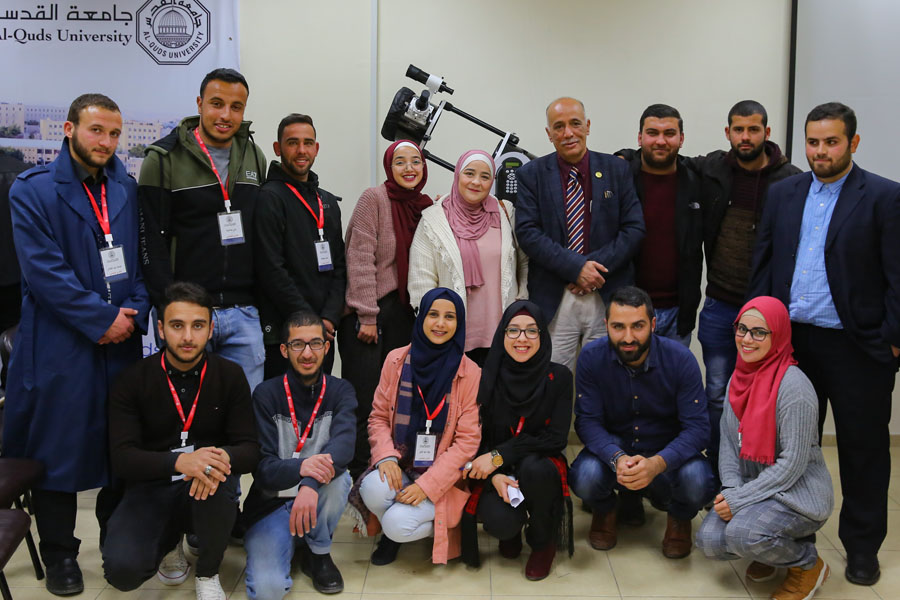 Jerusalem | Under the patronage of its president, Professor Imad Abu Kishek, and in partnership with the NOVA Astronomy and Space Society, has launched its first Astronomy Club as a step to strengthen astronomical literacy among students of all disciplines.

The club, which was established at the initiative of students from the physics department, aims to expose interested students to the basics and principles of astronomy, and to raise awareness around it. Through seminars and training courses conducted by the club members, it also aims to develop and increase cooperation of interdisciplinary research between the university and other scientific institutions, as well as institutions interested in astronomy.

Head of the Physics Department at Al-Quds University, Dr. Musa Abu Teir said that the club members will monitor the sun and the moon, crescents and other astronomical phenomena.

“The club will receive support from the NOVA Society, including trainings for the founders and members, in addition to providing equipment, which includes an electronic telescope in addition to lenses and filters already delivered to the club as a generous donation from Mr. Mahmoud Surri, Director General of the Surri Bros. Company for General Contracting, via the Association,” Dr. Abu Teir said. “The club is also due to receive more equipment in the future,” he added.

Dean of the Faculty of Science and Technology at the university, Dr. Mohammad Abul Haj praised this achievement by expressing appreciation to those who have made it possible, especially the Department of Physics, pointing out the importance of establishing such non-traditional extracurricular clubs which have a scientific nature, since it adds great knowledge of new disciplines to the students, and expands their innovative and creative skills.

“Establishing this club stems from the core belief of the university in the creativity and intellect of its students and teaching staff," Dr. Abul Hajj stressed.

Physics student and a member of the club, Mohammed Awawdeh said that the club aims to eradicate astronomical illiteracy and further spread knowledge of this science through holding various astronomical events and activities.

“The activities will include astronomical observing nights and lectures, in addition to making sure of having wide media coverage, especially on social media platforms, in order to help spread this science as well,” Awawdeh added.

It is noteworthy that Al-Quds University is dedicated to raising the level academic and intellectual level of its students through developing various scientific programs which contribute to the students’ competency. Meanwhile, the Department of Physics at the University continues working towards achieving its future goal of increasing cooperation with other science and research institutions in Palestine, this club being one of the most important steps in this framework.