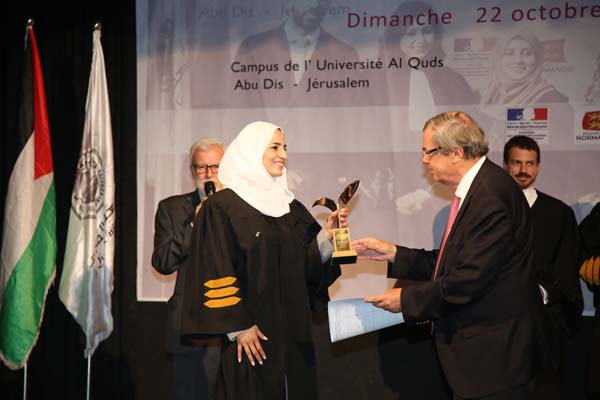 Ramallah Advocate plea of sexual assault earns her top honors
JERUSALEM –‘Hush’ continues to be the word when it comes to sexual assault. The smaller the society, the louder is the hush. But not at Al-Quds University where “Sexual Harassment at the workplace” not only won the prestigious International Human Rights Pleading Competition, but also transmogrified an attentive audience.

With the global epidemic spreading and no end in sight, few are capable of mustering enough courage to sound the siren about sexual harassment. Fear, embarrassment and cultural impediments prevent women from speaking up. In mentioning the unmentionable, Palestinian lawyer Reem Hassan broke many taboos at the International Human Rights Competition hosted by Al-Quds University and shined the spotlight on a sensitive topic.

Sponsored by the International Institute for Human Rights and Peace and the Caen Memorial for Peace, attorney Reem Hassan from the Palestinian city of Ramallah made a powerful, compelling case at the 9th annual competition. The #MeToo campaign inspired the pleading that won her the prestigious prize.

According to the Palestine Central Bureau of Statistics, 65.3% of women preferred to remain silent regarding the act of assault. And a number of women stay quiet at work for fear of losing their job or being blamed for the incident in question. This reaction is not unique to a given society or culture, as this phenomenon seems to beset all societies irrespective of economic, social or political backgrounds.

“Al-Quds University has had several activities on campus that have aimed at raising awareness on this matter” said Mohamad Khalaf, Dean of the Faculty of Law. “Our graduates are the future employees and employers, and by raising their awareness, they become prepared to act against sexual harassment and protect themselves and others from this plague”, he added.

The #MeToo campaign has been growing in the Arab world. The movement began on social media after a call to action by American actress Alyssa Milano wrote: “If all the women who have been sexually harassed or assaulted wrote ‘Me too’ as a status, we might give people a sense of the magnitude of the problem.”

The fact that Reem Hassan won a prize for discussing sexual harassment shows that the issue is gaining momentum in public discourse. “By giving my vote to [Reem Hassan], I wanted her case to win”, added Khalaf, who also served as one of the jurors that refereed the pleadings. According to him, her victory will certainly stir the public debate further around this important issue.

International participants praised Al-Quds University for providing a platform to address human rights issues. A senior European diplomat echoed a similar sentiment, and stated that he had also hoped that Hassan’s case would win. He also added that he admired Al-Quds University’s ability to address such issues of universal concern in spite of the “local hardships its faces due to the political environment, which can easily consume one’s attention”.

Although there are specific laws in Palestine that protect women against domestic and sexual violence, very few come forward for the laws to be implemented. This has pushed Al-Quds University to work even more adamantly in combating this phenomenon.

Al-Quds University and the International Institute for Human Rights and Peace share the desire to educate the public and raise awareness. That is why, with the help of the Caen Memorial for Peace, it wants to give local and international lawyers the opportunity to plead a case in public related to a recent violation of human rights in public.

Al-Quds University is a collegiate research university based in Jerusalem, Palestine.  Established in 1984 as the only Arab university in the city of Jerusalem, AQU currently offers 93 undergraduate and graduate degree programs, taught through its fifteen degree-granting faculties.