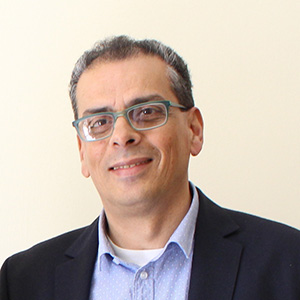 Isam Ishaq is Dean of Dual Studies at Al-Quds University and the coordinator of the Joint PhD in Information Technology Engineering.

He obtained his PhD degree in Computer Science Engineering from Ghent University in 2015 with a VLIR scholarship and obtained his graduation degree in Electrical Engineering from the Technical University of Berlin in 1996 with a DAAD scholarship. He was technical director of the Palestinian Academic Network (PLANET) as well as of one of the biggest Palestinian ISPs (Palestine Online) and was the director of the Said Khoury IT Center of Excellence and later the Dean of Dual Studies and Assistant President for Research, Development, and Innovation at Al-Quds University. He is a previous member of the Palestinian Higher Council for Innovation & Excellence. His research interests include mobile and wireless networks and the realization of the Internet of Things.

He has authored or coauthored more than 20 publications including four international journal articles, ten articles in international conferences, two Internet drafts, and one patent. Among other colleagues, he won the Best Demo Award at the Future Internet Assembly 2013.