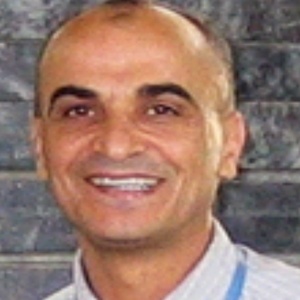 Professor of Applied Nuclear Physics. Born in Bethlehem, Palestine 1960. Holder of two doctorate degrees in Nuclear sciences from the University of Comenius and the Research
Institute of Preventive Medicine – Slovak Medical University in Bratislava, Slovak Republic.

During his study, he was working as research assistant at the Institute of Preventive and Clinical Medicine – Slovak Medical University in Bratislava, where he later became a senior research scientist in the field of radiation protection and dosimetry.

His research was focused on the Human body monitoring of internal radioactive contamination, Gamma spectroscopy, emergency and post – accidental monitoring. After his return to Palestine in 1997, Dr. Lahham joint Al-Quds University in Jerusalem where he worked at the Departments of Earth & Environmental Science, Medical imaging and physics.

In the year 2005 he established the Center for Radiation Science & Technology at Al-Quds University. Since its foundation, the center is active in research and technology transfer in the fields of ionizing and non-ionizing radiation. Dr. Lahham is a senior researcher in the field of non-ionizing radiation. He has published a lot of works about environmental radiofrequency radiation. From 2009 to 2012 Dr. In 2013 he acted as a visiting professor Dean of Allied Medical Sciences at Ahliya University– Bethlehem. Lahham was the Dean of the Faculty of Science and Technology. Since 2020 he is the Secretary – General of Al-Quds University Councils.

Author of more than 40 publications in English, Slovak & Arabic languages. Dr. Lahham has supervised a number of MSc. Students in Europe and Palestine